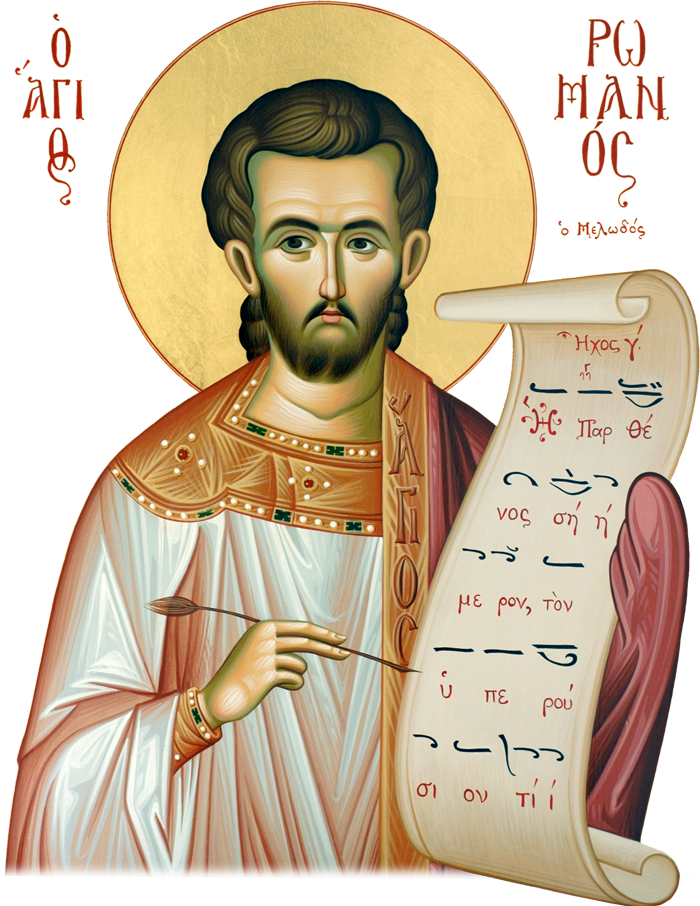 “The hymnologists of the Orthodox Church are Christians of virtue and great faith, having been endowed with musical talent as well as the power of religious inspiration. Their creations have enriched our worship services and have helped turn our souls towards God. Perhaps the greatest of all hymnologists is St. Romanos the Melodist. Many other hymnologists have written ecclesiastical hymns, but none of them inspired the Christians as much as St. Romanos.” This statement, issued by the National Forum of Greek Orthodox Church Musicians concisely states the reverence, appreciation and feeling all Orthodox Christians have for St. Romanos.

Romanos a Syrian Christian, born in Edessa (Homs), Syria, lived in the beginning of the 6th century. Relying on scanty information about Romanos’ life, and based on the fact that his work contains a large segment of Semitic expressions, the fact that he never attacks Jews, and on a later anonymous kontakion stating that as “God’s Orator” he is “from the race of Hebrews”, it is generally thought by most scholars that he was a convert from Judaism. However, other scholars (R.J. Schork, 1995) believe that this may not be true. Schork states that his Semitic expressions are similar to those prevalent in the Syriac Christianity of that period, his anti-Jewish polemic such as “lawless one” in his hymns of passion week may be due to prejudice or the exaggerated zeal of a recent convert, and the fact that the “Hebrew” reference in the later kontakion merely refers to the fact that he was non-Greek or a Syrian. Topping states that although a late tradition makes him a Jew and a convert, it is more likely that he belonged to a Christian family of Semitic origin.

Romanos was ordained a deacon and served in the Church of the Resurrection in Berytus (Beirut). Most sources agree that he went to Constantinople during the reign of the Emperor Anastasius I (491-518).

Church legend has it that during this time, Romanos’ voice was quite harsh and rasping and he was also tone deaf. It is said that the congregation cringed at hearing his voice. It was in the Church of the Most Holy Theotokos in the Blachernae quarter of Constantinople, that he received the gift of sacred poetry. After a religious retreat there, in his sleep on Christmas Eve, he saw a vision of the Most Holy Theotokos who told him not to despair. Blessing him with her right hand, she held forth a scroll with her left hand, saying, “Take the scroll and eat it.” The saint, in his dream, opened his mouth and swallowed the parchment. It was Christmas Day, and immediately he awakened and marveled and glorified God. According to an account by Poulos, the service commenced as usual and when it came time for the voice of Romanos to be heard, the participants braced themselves for the accustomed cacophony that would ensue. Then, mounting the pulpit in the church, Romanos began the strains of his kontakion: Today the Virgin gives birth to the one who is above all living things. But when the tone rolled across the church like the sound of a heavenly angel, the stunned listeners stood transfixed. When he had finished, the confused priest signaled him to continue and once again the resonant voice reverberated in the house of God. Then it dawned on one and all that a miracle had occurred. He was now hailed as the “Melodist.”

His talent was great. Unlike others, he wrote his hymns in simple language and produced a pleasant meter in the verse by the way he accented words. Most scholars agree that he wrote in the colloquial idiom (common language) of his time. The hymns he composed appealed to the hearts of the people, and are still sung today. Romanos has been called "Sweet Singer" (Glykophonos), "Melodist" (Melodos), and "Righteous Chanter" (Psaltis Dhikeosinis). There is no evidence that he was ever ordained to the priesthood or served in a monastery or ever held an official appointment in the Emperor’s court.

Romanos wrote many hymns celebrating the mystery of the Incarnation, the Passion, the Resurrection, and the living of a Christian life. Until the 12th century his Christmas Kontakion was performed by a double choir (from Hagia Sophia and the Church of the Holy Apostles) at the Imperial banquet on that feast day.

Kontakia consist of 25 strophes (troparia), usually of 21 verses each, with a refrain. Dramatic and pathetic dialogue play a great part in the structure. Romanos’ works are essentially long metrical homilies, arranged in stanza form, set to music and designed to be sung after the reading of the scriptures as part of the morning prayers. They were most probably chanted in urban churches and not monasteries, and are essentially sung sermons. The Greek word for this type of literary form is kontakion derived from the Greek word kontax, the rod or staff around which the parchment scroll containing the text was originally wound. The works are a metrical scheme in which there is a pattern of conforming stressed and unstressed syllables in each line. This pattern of stress is determined by the pronounced and written accent. Classical poets like St. Gregory of Nazianzus who composed the Presanctified Liturgy based their writings on the quantity of time (long or short) needed to pronounce each syllable.

There is no complete edition of Romanos’ kontakia. Although the Synaxarion states that Romanos wrote “more than a thousand” hymns, Toppings feels that this is an exaggeration, a metaphor for the poet’s generous gift of hymnody to the church. Some 59 genuine hymns have been identified from medieval Byzantium, the remaining being lost. Unfortunately none of the music accompanying them survives. His most famous kontakia are those of Christmas, Pascha, and the Passion. St. Romanos is also said to have composed the Akathistos Hymnos, a kontakion which we still chant during the Friday evening services of Great Lent.

This literary form reached its highest development in Romanos’ kontakia with their elaborate metrical system and vigorous dialogues. Unfortunately the form degenerated in the following centuries. Romanos borrows heavily from earlier Greek sermons and other sources, though it is not certain whether he also depends on St. Ephraim the Syrian. His masterpieces presented dignified diction and elaborate metrical patterns. He aimed not only to preach but to please. He seemed to be well trained before arriving in Constantinople and probably was well educated in one of the last schools of rhetoric still flourishing in 6th century Syria.

Romanos died in peace on October 1st and is buried in the Church of the Theotokos, in Constantinople, where his feast is still celebrated. The exact year of his death is not precisely known. Many scholars set it as 555 AD, based on an Imperial document of 551 and his apparent mention of violent earthquakes that shook the Near East in 552, 554, and 555 AD. He was a productive genius and artist, writing and accenting many kontakia. He has been called the patron saint of all who sing for the Church. Others say he is the leader in the world of religious hymnology. Within a few decades after his death, Romanos was canonized and venerated in Byzantium and Armenia and after the 9th century, in Russia. His icon pictures him in the white robes of a young deacon.

The only authority for the life and date of this greatest of Orthodox hymnographers is the account in the Menaion for October (Feast Day, October 1). Beyond the description in the Menaion, there are only two mentions of St. Romanos’ name, one by the 8th Century poet, St. Germanos, and one by Suidas who calls him “Romanos the melode”. None of the Byzantine writers on hymnography allude to him; his fame was practically extinguished by the newer school of hymn-writers which flourished in the 8th and 9th centuries. Krumbacher has made it fairly certain, by a number of critical arguments, that the emperor named in the Menaion as reigning when Romanos came to the capital, Constantinople, is Anastasius I (A.D. 491-518) and not Anastasius II (A.D. 713-716); Pitra and Stevenson are of the same opinion. Probably, then, he lived through the reign of Justinian (A.D. 527-565), who was himself a hymn-writer; this would make Romanos a contemporary with two other Byzantine hymnographers, Anastasios and Kyriakos.

“In poetic talent, fire of inspiration, depth of feeling, and elevation of language, he far surpasses all the other melodists. The literary history of the future will perhaps acclaim Romanos for the greatest ecclesiastical poet of all ages”, say Krumbacher. All the other critics of Byzantine poetry subscribe to his enthusiastic praise.

The following primary and secondary sources were used for this article: